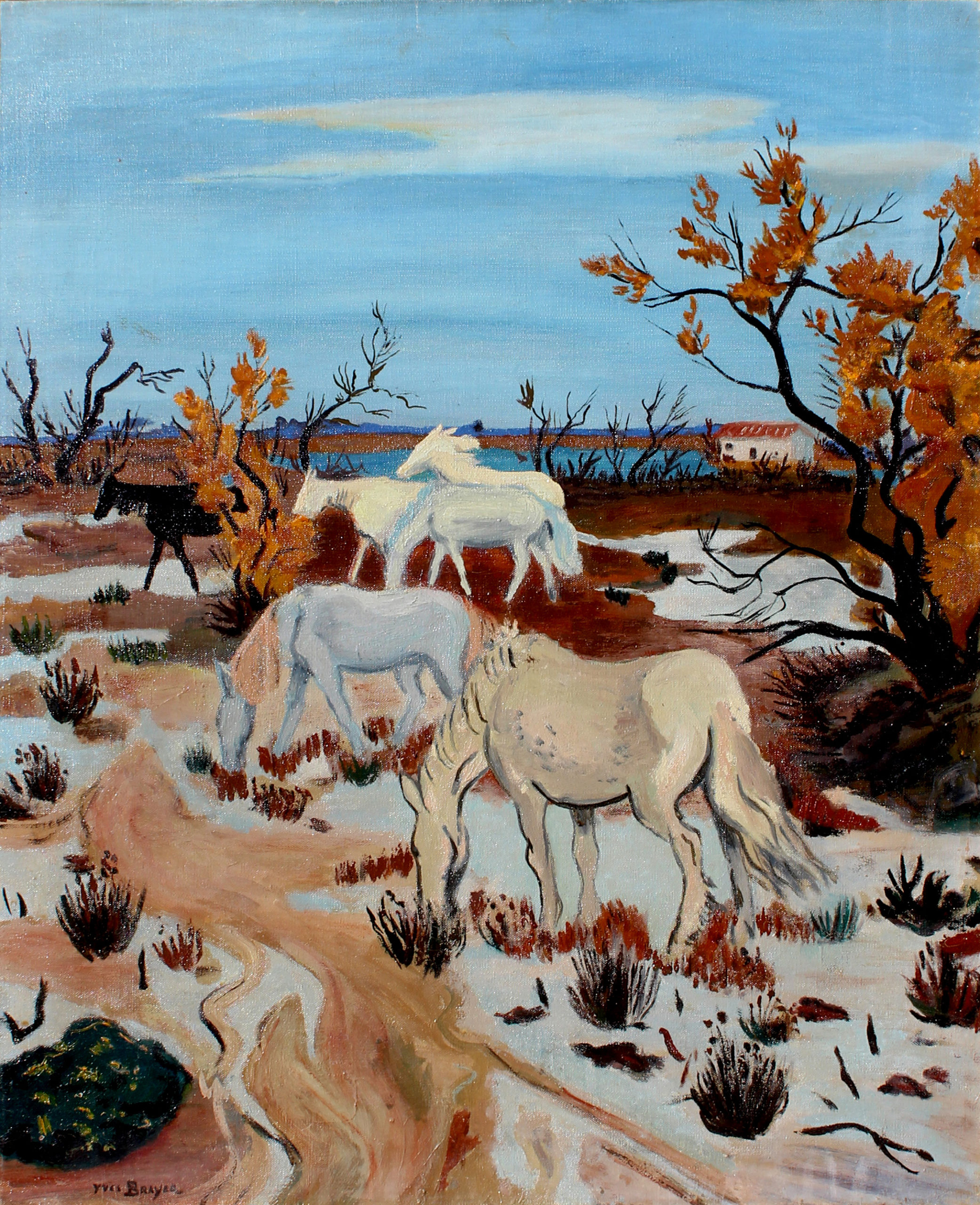 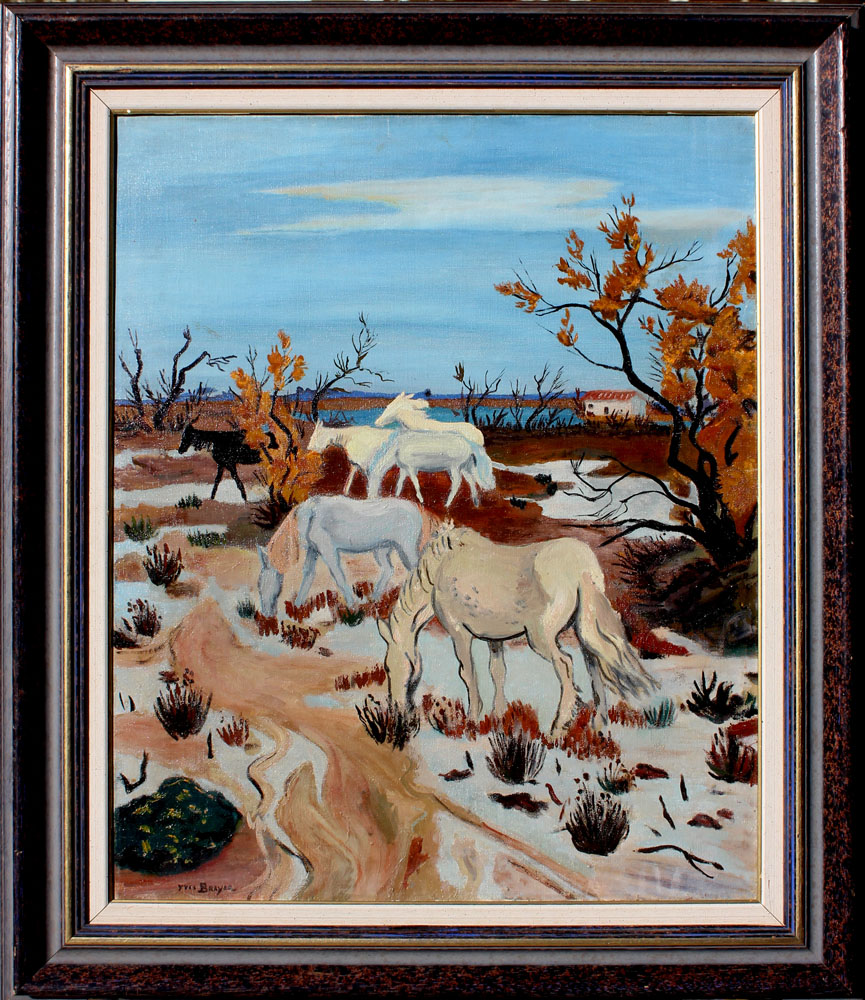 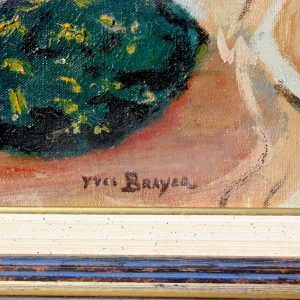 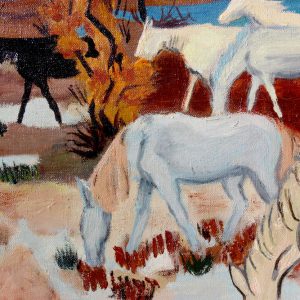 Yves Brayer was a master of graphism and colours. He stands amongst the most celebrated contemporary French painters. Although he was faithful to the figurative tradition, his ample métier was enriched by his personal vision.

His works proved to be very diverse, for besides his well-known landscapes, he also painted vast canvases, portraits and still life. Moreover, he was deeply interested in all the techniques at the disposition of his fertile artistic mind and craft.

A lover of Mediterranean landscapes, Yves Brayer sojourned in Morocco, Spain and Italy before settling down in the Camargue and in Provence.

As with other fellow painters of the inter-war years, Yves Brayer devoted a large part of his work to making a record of everyday life. While recognizing the pictorial tendencies of late 19th century and early 20th painting, some painters preferred follow the path led by Vuillard and Bonnard, as did the “Réalité Poétique” group, or the path of admirers of Courbet’s work, such as the “Forces Nouvelles” movement. Although Brayer was always independent, he was on friendly terms with such painters such as Francis Gruber, founder of “Nouveau Réalisme”, the New French Realism of the 50s made famous by Bernard Buffet.

Yves Brayer was born in Versailles in 1907, but spent most of his childhood in Bourges. Upon his arrival in Paris in 1924, he set out immediately for the academies in Montparnasse and, from there, for the Ecole des Beaux-Arts. There, his artistic personality reveals itself at an early stage, encouraged by masters such as Jean-Louis Forain.

While he was still a student, his works were displayed at the “Salon d’Automne” and the “Salon des Indépendant”. In 1927, Yves Brayer was awarded a state grant and he left for Spain where his encounters with masters from the Prado museum would prove to have a crucial influence on his own production.

After a stay in Morocco supported by a prize created by Maréchal Lyautey, he was awarded the Grand Prix de Rome in 1930. At first nostalgic of Spain, Yves Brayer is then deeply engaged by the richness of Italian life in the early 1930s.

Back in Paris in 1934, he assembles his work for an exhibition at the Galerie Charpentier, faubourg Saint-Honoré, where the public audience discovered the authenticity, the powerful and the original character, of this 27-year-old painter.

Brayer was now settled in Paris, first in the Panthéon neighbourhood; then, in 1935, he moved to rue Monsieur le Prince in the 6th arrondissement. Through different periods, he continued to paint in Paris, as he had during his student days. In 1940 Brayer settled in Cordes sur Ciel in the department of Tarn. There, in 1960, a museum dedicated to his work would be opened in the most elegant room of the Town Hall. When he returned to Paris in 1942, Jacques Rouché appointed Brayer costume-and-set designer for a ballet at the Opera de Paris. Brayer remained in occupied Paris throughout the war, painting the snowy city and, at last the liberated capital.

The year 1945 marked a turning point in his career. In Provence, he was struck by the architectural harmony of the country side, harmony created not by human hand but by nature pure and wild. He was enchanted by the diverse forms and limestone folds of the Alpilles, and by the vast expanse of Camargue filled with white horses and black bulls. Soon, he decided to spend several months in Provence every year.

After his Spanish period, which favoured black or dark colours, and then the Italian period ochres and terracotta reds, he diversified his palette with greens, pale yellow and several shades of blue. Strongly attracted to Mediterranean landscapes, Brayer returned to work in Spain and Italy, but Provence and Camargue remained his favourite places until the end of his life.