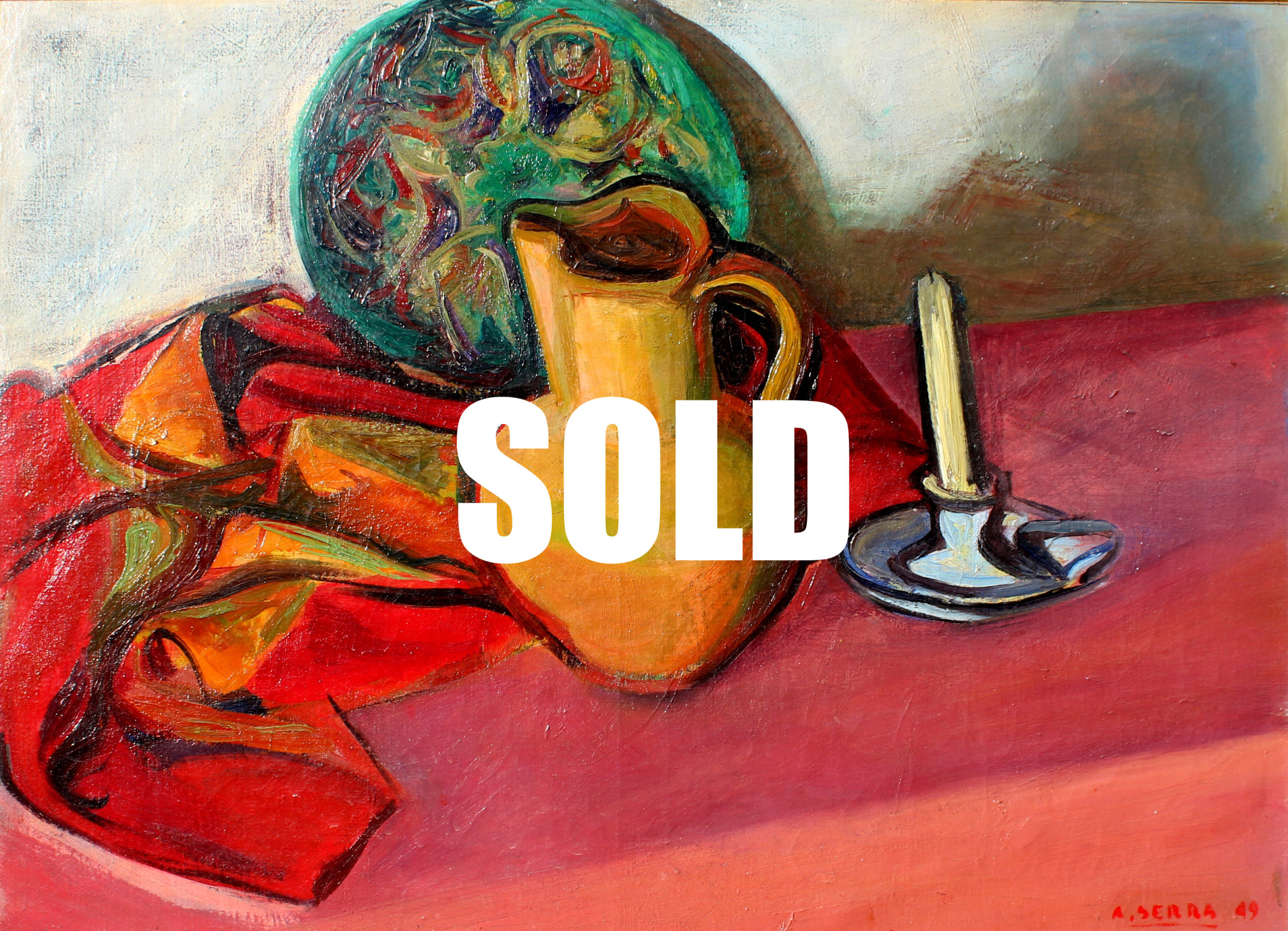 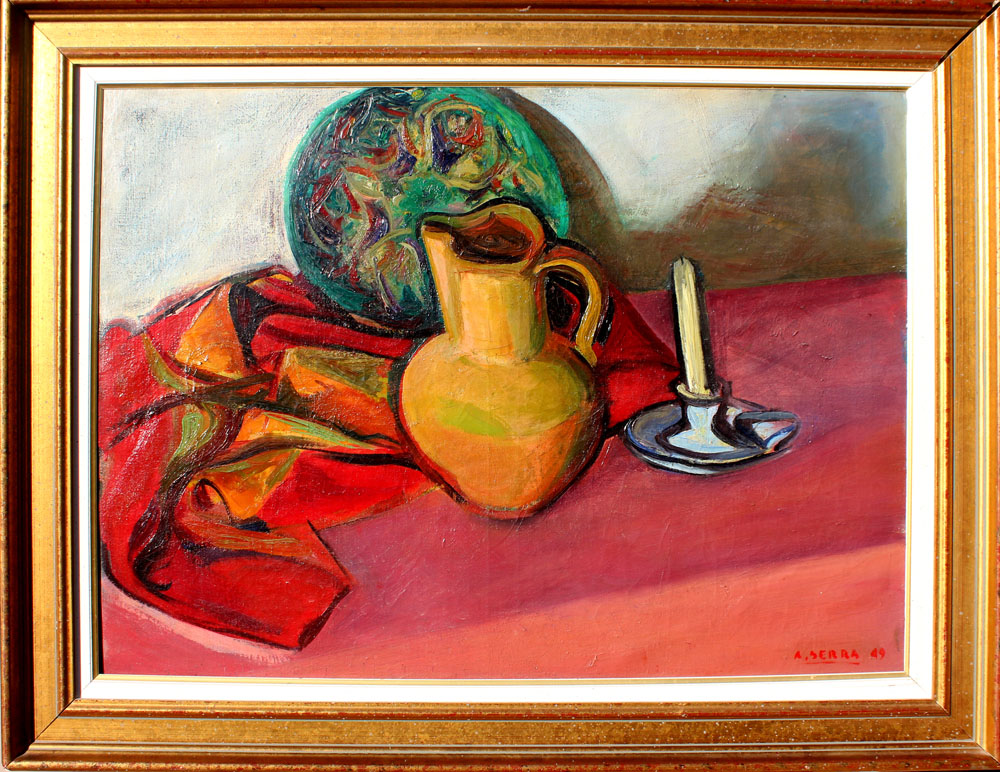 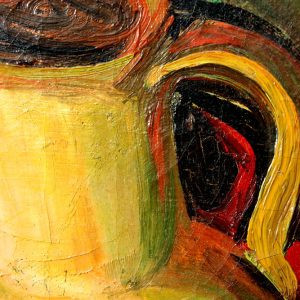 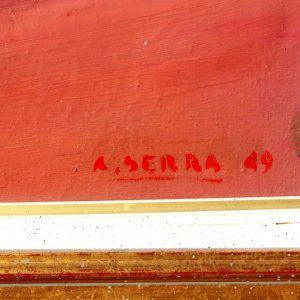 Antoine Serra was born on the island of La Maddalena 1908.

His family was poor and suffered much illness. Antoine Serra was six years old when his mother decided to leave her native island with her children to try to assure them better days. They arrived in Marseille, where one of her sisters who welcomed her in.  She travelled with her three daughters and her son, of whom Antoine was the third in the family.

Antoine’s childhood was difficult: he had to work at a young age and quickly became aware of social inequalities, hence his commitment, from adulthood, to militancy in the class struggle.

The first brushes he used are those of the house painter who used him as an apprentice. He was then a young adolescent and discovered quite a different type of painting. On the quays of the port of Marseille, he observed a man sitting in front of a horse, reproducing on a canvas: the old port and its sailboats, the facade of the town hall. Having witnessed this spectacle, he decided to make it his vocation.

He asked his mother to enrol him at the school of fine arts in Marseille , where he obtained several first prizes.

His first materials were scraps of wallpaper, plywood, cardboard as he had not enough money to buy canvas.

Several years later, he became the owner of his own building painting business. He continued to paint.

His career as an artist

In 1928, he participated in his first exhibition with a group of painters, including Simon Auguste and Louis Toncini . It is an engaged artist who founded, in 1933, the group of “proletarian painters” who would later become the group of “people painters” with other politically engaged artists like, François Diana , Louis Toncini or Louis Roc. The paintings produced during this period represented factories, portraits of workers, all of which reflected deep sadness, a feeling of pain and misery.

In 1936, he became alive in Marseille, still with the group of his painter friends, Louis Toncini, François Diana and Léon Cadenel, the first Provincial Culture House (of which he is one of the founding members), inaugurated by Aragon and Malraux .

After the war, he experienced, a magnetic attraction for the Alpilles , which he discovered at random during a stay and was amazed by “landscapes enveloped in a light that magnifies forms”. He then decided to settle in this region, which he did in 1946.  He bought an old farmhouse and renovated over the years, the “Mas du Diable”, located at the foot of the Baux de Provence .

It was at this time where he made Provence his home that he was able to give free rein to his art, far from the bustle of Marseille and his daily commitments. However, he still had another wish to fulfill: to get to know his native land, Sardinia , which he had left when he was very young: he thus made several stays there, from which he returned dazzled.

His return to his origins sharpened in him a frenzy of creation. He moved to Olbia , welcomed by close cousins, who offered him hospitality, then spent several months in the mountainous region, in the heart of the villages of Oliena and Orgosolo . He painted scenes from everyday life there, interior scenes: women making bread or knitting, family scenes by the fireplace, the glaring truthfulness of daily life.

He lived the last fifteen years of his life in Mouriès, a small Provencal village in the heart of the Alpilles, in a farmhouse that he had renovated. He died on May 6, 1995, at the age of 87 years.

Throughout his life, he offered many paintings to all his friends, his admirers, as well as to all the members of his family to whom he had remained very close.

At the instigation of the Saint-Chamas Tourist Office, a retrospective was carried out: his family gathered the works in their possession, which bear witness to more than 50 years of painting. Fifty paintings were exhibited from June to august 2009.

Throughout his life, Antoine Serra’s painting knew, in successive waves, a constant evolution in diversity. His palette, rather dark during his young years in Marseille, with barely lit interiors, contrasts with the sunshine land that is Provence, towards lighter and coloured shades, hence the nickname he was given of “Painter of light”.

Integrated into this light, he paints objects, flowers, fields and hills, fruits placed on plates in coloured backgrounds, trees, characters (where he excelled in portraiture, capturing the mystery of the human face), the woman, but also painter of the arid Crau of Provence, the harsh Luberon , or the Roussillon of ocher and gold, without forgetting the blue sea and the boats dancing on the port of Martigues flooded with sun:

” Oils, gouaches, tempera, watercolors, drypoints, celebrate the multifaceted resources of Provence, the scents of the hill, the charms of the creeks, the renewed joys of the Eternal Sea and the disturbing mysteries of terroir with indecipherable secrets ”.

Charles Mourre says of him in 1951 that he is “a meditator, which does not prevent him from taking from nature all that it offers him heady and tempting.”

In front of a landscape, the painter reacts as a poet, even a philosopher. Whether or not what is translated on the canvas corresponds to the memory that our memory has been able to preserve from reality, is really only of secondary importance: the transposition designed by Antoine Serra creates a kind of landscape living its own life.

Similarly, for a portrait, if it simplifies the form by a concern for synthesis, it further accentuates the personality of the subject whose interior life he expresses with intensity.